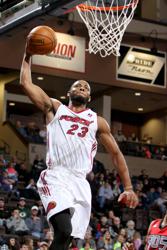 Sioux Falls, SD – The Sioux Falls Skyforce have announced their official 2017-18 regular season schedule. The 50-game schedule features 24 home games, all to be played at the Sanford Pentagon, as well as 24 road games and two neutral games as part of the 2018 NBA G League Showcase in Mississauga, Ontario.

The Skyforce will open their 29th season on the road, matching up with one of the league’s newest franchises, the Memphis Hustle, on Saturday, November 4, 2017. Sioux Falls fans won’t have to wait too long, though, to see their team in person. The Skyforce return for their home opener on Monday, November 6 against another of the league’s newest teams, the Lakeland Magic at 6:30 p.m. at the Sanford Pentagon.

Sioux Falls’ home schedule features two separate five-game home stands. The first spans from Saturday, December 23 to Tuesday, January 2 and the other spans from Monday, January 29 to Tuesday, February 13, 2018. In total, the Skyforce play 16 of their 24 home games on weekends, while the eight remaining games are on weekdays.

The NBA G League features four new franchises this season, including the Agua Caliente Clippers (Los Angeles Clippers), Lakeland Magic (Orlando Magic affiliate), Memphis Hustle (Memphis Grizzlies affiliate), and the Wisconsin Herd (Milwaukee Bucks affiliate). Sioux Falls fans will have the opportunity to see three of the four new teams play in person, as the only team that doesn’t visit during the 2017-18 season is the Wisconsin Herd.

In addition, the Minnesota Timberwolves have purchased the Iowa Energy organization, and have changed the team’s name to the Iowa Wolves. The Los Angeles Lakers have also made some changes with their NBA G League affiliate, renaming the Los Angeles D-Fenders to the South Bay Lakers for the upcoming season. With the league’s growth, there will now be six conferences. Sioux Falls will be paired with Iowa, Oklahoma City, and Memphis in the Midwest Division.