The three-day event uses a round-robin format with two games each day.

“This event allows basketball fans to see teams from conferences all over the country competing against each other in a first-class atmosphere and facility,” said Jesse Smith, executive director of the Sanford Pentagon. “Since this time last year, the number of NCAA Division I games at the Pentagon has nearly doubled. Teams want to play here, and we make sure players, coaches and fans have a memorable experience.”

The Pentagon has hosted 15 Division I men’s basketball games since opening in 2013. Programs like Wisconsin, Colorado, UNLV, Iowa State and Minnesota have played in the venue in front of national TV audiences on ESPN and the Big Ten Network. The Pentagon also hosted the 2017 NCAA Division II men’s basketball national championship game that was broadcast live on CBS.

South Dakota (22-12 in 2016-17) won the Summit League regular-season title last season for the first time in program history. Summit League Coach of the Year Craig Smith enters his fourth year at USD. First-team all-Summit League performer Matt Mooney returns for his junior season. The 6-3 guard, who was the third-leading scorer in conference play, was also named Summit League Transfer of the Year last season. USD is 1-1 all-time at the Pentagon.

A member of the Horizon League, Youngstown State (13-21 in 2016-17) advanced to the semifinals of the conference tournament last season. New head coach Jerrod Calhoun is accustomed to the atmosphere of Heritage Court. In March, Calhoun led Fairmont State to a runner-up finish at the NCAA Division II men’s basketball Elite Eight played at the Sanford Pentagon.

Southern Miss (9-22 in 2016-17) competes in Conference USA. Head coach Doc Sadler is entering his fourth season as head coach of the Golden Eagles. Sadler is a familiar name to college basketball fans in the Midwest. He led the Nebraska men's basketball team for six seasons, posting a record of 101-89 with three NIT appearances.

Southern Miss, Northern Colorado and Youngstown State also have scheduled opening round games of the Sanford Pentagon Showcase at their respective home courts. Southern Miss will play Blue Mountain (Mississippi) on Nov. 20 in Hattiesburg, Mississippi. Northern Colorado will play Northern New Mexico College on Nov. 21 in Greeley, Colorado. Youngstown State will play Westminster (Pennsylvania) on Nov. 21. NCAA rules allow programs to count multi-team events as only two games toward their regular season total of 29, even if MTEs include as many as four games and all games are played within a 14-day window. South Dakota also has the option of adding a fourth game.

What the head coaches are saying about the Sanford Pentagon…

Craig Smith, South Dakota:  "We are thrilled to to be a part of this first-class event. The Pentagon is a state-of-the-art venue with tremendous nostalgia. The people of Sioux Falls are fantastic fans and the hospitality from the Pentagon is top notch in every way, shape and form."

Jeff Linder, Northern Colorado: “We are excited and thankful for the opportunity to play in the Sanford Pentagon Showcase. Their staff has done an unbelievable job at providing a high-caliber experience for student-athletes and coaches. We look forward to the competition in an excellent venue and playing in front of the Sioux Falls community."

Jerrod Calhoun, Youngstown State:  “The Pentagon is one of the best basketball venues in the country. My experience of playing at the Pentagon just a few months back played a big role in the decision to bring the Penguins to Sioux Falls, S.D. People love basketball out there and we are excited to be a part of this great tournament.”

Doc Sadler, Southern Miss: “There are a lot of exempt tournaments, but I am excited to be playing where the fans love basketball.” 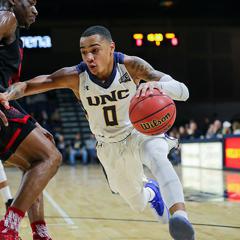