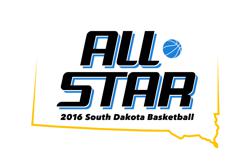 Both events are back on Heritage Court for the second straight year.

The First Five ceremony honors South Dakota players of the year and First Five athletes in boys and girls basketball. Athletes from all three of the state’s classes of basketball are eligible for First Five honors, a tradition established by Argus Leader Media in 1979.

Tickets for the First Five ceremony are free, but there is limited availability. They can be picked up on a first-come, first-serve basis at the Argus Leader or Sanford Pentagon beginning Tuesday, March 8, at 9 a.m.

In last year’s inaugural ceremony at the Pentagon, St. Thomas More’s Alexys Swedlund was named the girls player of the year, and Sioux Falls Washington’s Deng Geu was honored with the boys top award.

The SDBBCA/Sanford Pentagon All-Star Games will feature the top seniors in girls and boys basketball as selected by coaches throughout South Dakota. The girls play at 1 p.m., while the boys tip at 3 p.m. Both games will be carried live by Midco Sports Network.

“On behalf of the South Dakota Basketball Coaches Association, we are looking forward to working with the Sanford Pentagon as we host the second annual boys and girls all-star games and honor the best players and coaches in South Dakota,” said Lynn Frederick, executive secretary of the SDBBCA and head girls basketball coach at Brookings. “Last year's event was a huge success in promoting basketball in our state. The players, coaches, officials and fans involved enjoyed the experience and were impressed with the professionalism and organization of the staff involved in the games.”

About Argus Leader Media
Backed by the power of the USA TODAY NETWORK, Argus Leader Media is a next generation media company that empowers communities to connect, act and thrive. With sports brands such as the Elite 45 in football and First Five in basketball, Argus Leader Media continues to be a leader in high school sports coverage in the region with ArgusLeader.com as the cornerstone of that coverage.

About the Sanford Pentagon
The cornerstone of the Sanford Sports Complex in Sioux Falls, South Dakota, is the Sanford Pentagon, a 160,000-square-foot, five-sided facility featuring nine basketball courts, including the 1950s/1960s-inspired Heritage Court. The venue combines state-of-the-art amenities—including high-definition video boards and executive suites—with period-specific finishes that are a nod to the nostalgic days of basketball.