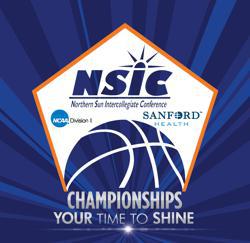 SIOUX FALLS, S.D. – Tickets for the final three rounds of the Northern Sun Intercollegiate Conference/Sanford Health Men’s and Women’s Basketball Tournament are on sale at Ticketmaster.com and the Sanford Pentagon box office. The facility will host the quarterfinals, semifinals and finals from Feb. 27 to March 1.

The NSIC/Sanford Health Men’s and Women’s Basketball Tournament will play its first-round games at the top-four seeds from the NSIC’s North and South divisions on Feb. 24. The quarterfinals, semifinals and finals will be played on the Pentagon’s Heritage Court.

The NSIC is a 16-team, 17-sport, NCAA Division II conference with teams located in Iowa, Minnesota, Nebraska, North Dakota and South Dakota. The NSIC has won three NCAA Division II basketball national championships since 2006 and has sent men’s teams to the NCAA Division II Elite 8 eight of the past 10 years, while women’s squads have advanced four of the last seven years.

For a complete schedule, visit the tournament page at northernsun.org/nsictourney.