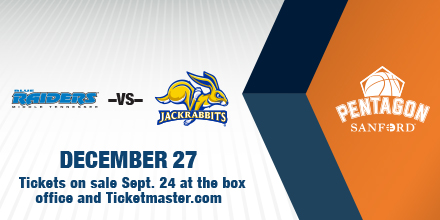 SIOUX FALLS, S.D. – A fourth NCAA Division I men’s college basketball game is coming to the Sanford Pentagon this season. South Dakota State and Middle Tennessee will play a regular-season contest on Dec. 27 at 4:30 p.m., and the game will be televised live by FOX Sports North.

Tickets go on sale Sept. 24 at 10 a.m. at Ticketmaster.com and the Pentagon box office.

November and December at the Pentagon include a quartet of Division I men’s basketball games on Heritage Court. Iowa State and Colorado are set for a Nov. 13 meeting, Minnesota and Oklahoma State play on Dec. 12 and South Dakota and Florida Gulf Coast clash on Dec. 28.

“It’s going to be an entertaining winter for basketball in Sioux Falls,” said Eric Larsen, general manager of the Sanford Sports Complex. “Anyone hungry for Division I men’s basketball has plenty of options to take in games with both national and local flavor.”

Middle Tennessee has defeated South Dakota State twice since the two teams first met during the 2005-06 season in Murfreesboro, Tennessee. The Blue Raiders edged out an 89-82 overtime win in the initial meeting before topping the Jackrabbits 57-56 in Brookings a season later.

South Dakota State (24-11 overall, 12-4 Summit League in 2014-15) is coming off an appearance in the National Invitation Tournament that saw the Jackrabbits bounce top-seeded Colorado State--their first Division I postseason win--before losing at Vanderbilt. The NIT bid was South Dakota State’s fourth straight postseason appearance as the Jackrabbits made the NCAA tournament in 2012 and 2013 and the College Basketball Invitational in 2014. South Dakota State was the Summit League’s regular season co-champion and conference tournament runner-up a year ago.

“The Sanford Pentagon is a tremendous facility, and we look forward to playing there again this season against a quality Middle Tennessee State team,” South Dakota State head coach Scott Nagy said. “It’s an easy trip for our basketball team, but we know it won’t be an easy game.”

Middle Tennessee (19-17 overall, 9-9 CUSA in 2014-15) made it to the finals of the Conference USA Championship last season, falling to UAB in the title game. The Blue Raiders were selected for the College Insider Tournament, marking the program’s third postseason tournament in four years.

“We are very excited about playing against a very good opponent in South Dakota State,” said Middle Tennessee head coach Kermit Davis. “They had a lot of success last season and they return a lot from that team, so we are looking forward to the challenge. One of our former players, Shawn Jones, played in the Sanford Pentagon last season as a member of the Sioux Falls Skyforce and he raved about the top-level facility and fans. We always seek out playing in those types of environments.”

About the Sanford Pentagon
The cornerstone of the Sanford Sports Complex in Sioux Falls, South Dakota, is the Sanford Pentagon, a 160,000-square-foot, five-sided facility featuring nine basketball courts, including the 1950s/1960s-inspired Heritage Court. The venue combines state-of-the-art amenities—including high-definition video boards and executive suites—with period-specific finishes that are a nod to the nostalgic days of basketball.