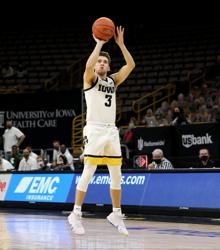 SIOUX FALLS, S.D. –The Iowa Hawkeyes will return to the Sanford Pentagon to take on the Utah State Aggies on December 18.

Iowa will play at the Pentagon for the third time overall and second straight season after taking on then-No. 1 Gonzaga last year. Utah State played three games on Heritage Court in 2020 during the inaugural Crossover Classic. The Pentagon has hosted 54 NCAA Division I men’s college basketball games since opening in 2013.

Tickets will be available for purchase on Ticketmaster Oct. 21 starting at 10:00 am.

“Putting these matchups together and bringing in high-caliber programs like Iowa and Utah State to Sioux Falls is always a thrill for us, mainly because this community embraces them and shows great support,” said Steve Young, president of Sanford Sports. “We’re excited to welcome back the Aggies and Hawkeyes in consecutive years and especially want to thank Coach McCaffery for being a constant supporter of what we do at the Pentagon. This game promises to produce an electrifying atmosphere with the best basketball fans in the country being able to come back inside and watch these two teams play.”

A member of the Big Ten Conference, Iowa is coming off a 22-9 season and a third place conference finish with a mark of 14-6. The Hawkeyes advanced to the second round of the NCAA Tournament before falling to Oregon. In the offseason, Iowa landed North Dakota transfer and All-Summit League selection Filip Rebraca and have multiple upperclassmen returning including all-conference honoree Jordan Bohannon.

“We are eager to return to Sioux Falls for a third time and challenge a successful Utah State program,” said Iowa head coach Fran McCaffery. “The community and Sanford Pentagon staff always welcome us with open arms and provide a first-class experience. This will be another great opportunity for our fans in the northern part of the state to see our team play.”

First-year head coach Ryan Odom inherits a Utah State team that went 20-9 last season. Odom spent the last five seasons at the University of Maryland – Baltimore where in 2018 his team became the first No. 16 seed to defeat a No. 1 seed in the NCAA Tournament when the Retrievers defeated Virginia.

“We are absolutely thrilled to be returning to the Sanford Pentagon and excited to compete against an excellent Iowa basketball program,” said Utah State head coach Ryan Odom. “This event will be a great experience for our players and Aggie fans.”

This will be the fourth meeting between Utah State and Iowa. The Hawkeyes won the first two contests, while the Aggies won the last meeting in 2007.