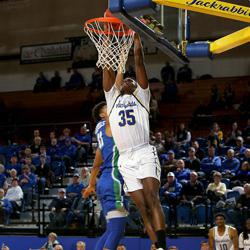 The Jackrabbits will play three games in the event, beginning with a first round matchup against Creighton, Wednesday, November 25 at 6 p.m. on ESPN2.

The Bad Boy Mowers Crossover Classic is a new event whose eight programs have a combined 54 appearances in the Sweet Sixteen and 16 trips to the Final Four. The field of teams also includes Dayton, Memphis, Ohio State, Texas A&M, West Virginia and Wichita State. All 12 games will air live on the ESPN family of networks.

“This is an unbelievable showcase for our program,” head coach Eric Henderson said. “We get to play three excellent teams on national television in our own state. When presented with this opportunity, we jumped at it.”

A limited number of tickets will be made available to the general public beginning at 10 a.m. Fans can purchase tickets by clicking here.

The Bad Boy Mowers Crossover Classic will mark the first three games of the season for SDSU. It replaces the Little Apple Classic in Manhattan, Kansas, where the Jacks were originally slated to open the year.

South Dakota State compiled a 22-10 record in 2019-20 and won a share of the Summit League’s regular season title for the third consecutive year.