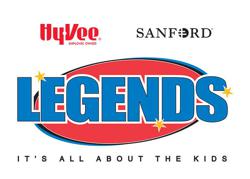 SIOUX FALLS, S.D. – A new class of outstanding high school seniors has been selected to receive the fifth annual Legends for Kids Scholarship. The scholarship is a $5,000 award that recognizes high school student-athletes for their exceptional character in leadership in athletics, school and community involvement. This year, the number of recipients increased to ten, up from nine in 2019. This class will bring the cumulative total to 40 scholarships totaling $200,000 in five years.

The following graduating seniors were selected based on nominations from coaches, teachers and administrators:

The Hy-Vee/Sanford Legends program provides learning opportunity for young student-athletes to grow and be inspired in the world of sports by providing different sporting clinics and camps. Each year, celebrity athletes who represent the Legends goals—quality, integrity and character—are brought to Sioux Falls.