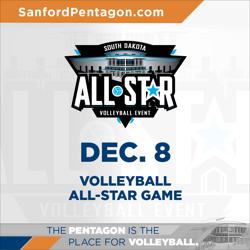 The all-star match features 24 seniors from across the state. Rosters will be announced later. Midco Sports Network will live stream the match online.

The SDVBCA consists of 182 members from 111 schools, and those numbers continue to grow. Volleyball is the second-most popular sport in the nation for high school girls, according to the National Federation of State High School Associations, with 452,808 participants in 2018-2019.