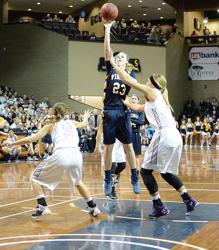 SIOUX FALLS, S.D. - Augustana men’s and women’s basketball tickets are now on sale for the 2019-20 season, including games at the new home of Augustana Basketball, the Sanford Pentagon.

Tickets for all home games may be purchased by visiting GoAugie.com/tickets.

All home conference basketball games, played from December through February, will be at the Sanford Pentagon as well as a special exhibition game on Friday, November 1. The remaining home non-conference and exhibition games in October and November will be played in the Elmen Center on the Augustana University campus.

November 1 marks game one for Augustana basketball at its new home, as the Viking men will take on Concordia (Moorhead) in an exhibition game. That special event will include honoring Sanford Health & a legacy of leadership, in addition to being the first game at the Sanford Pentagon this season.

Augustana Men’s Basketball returns a team that finished 18-11 overall and were the co-champions of the NSIC South Division.  The men are a year older, after not having a senior on last year’s squad, led by junior Matt Cartwright. He averaged 16 points per game en route to earning Second Team All-NSIC honors. The Viking women return after finishing 22-11 overall last season and bring back four players who started at least 15 games. That includes NSIC Freshman of the Year Vishe’ Rabb, who averaged 10.7 points and 3.3 rebounds per game.

Season tickets are still available and provide the best deal to all fans. Fans can save 25-30-percent off single-game prices by purchasing season tickets. For more information and to purchase, visit GoAugie.com/tickets, call 605-274-5420 or stop by the Elmen Center athletic offices Monday-Friday, 8:30 a.m.-4:30 p.m.