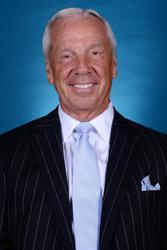 SIOUX FALLS, S.D. – Hall of Fame basketball coach Roy Williams will be the featured speaker at the South Dakota All-Star Awards Ceremony at 7 p.m. on April 7.

“Roy Williams is one of the greatest coaches in all of sports, and we are thrilled he is coming to speak at the Sanford Pentagon,” said Jesse Smith, director of operations at the Sanford Pentagon. “This event will be a special evening for the student-athletes and their families and hearing Coach Williams speak will definitely add to that experience.”

Kirk Hinrich, lead sports academy specialist at the Sanford Pentagon, played for Williams at Kansas University where he was an All-American and led the Jayhawks to the Final Four in 2002 and the NCAA men’s championship game in 2003. Hinrich played an instrumental role in bringing his former coach to Sioux Falls.

During the ceremony on April 7, high school players of the year will be announced.

All-star games featuring the top girls and boys players in the state will take place April 8, beginning at 1 p.m.

Admission to the awards ceremony is free.

Tickets to the all-star games will be available at the Sanford Pentagon.