“We created the structure of this event to give the Pentagon the best possible atmosphere for the teams and fans,” said Jesse Smith, director of operations for the Sanford Sports Complex. “Fans will be able to watch competitive basketball all day for one price, featuring teams from South Dakota and across the country.”

Northern State was scheduled to play in the Puerto Rico Thanksgiving Classic, but that event was canceled due to the damage by Hurricane Maria.

“When our Puerto Rico exempt tournament was canceled, the first place we contacted was the Sanford Pentagon,” said Paul Sather, Northern State head men’s basketball coach. “It's staff, in particular Paul Seville, really went out of their way to make this Pentagon Classic possible.  We want to thank them for the work they did to help us with such a short notice.” 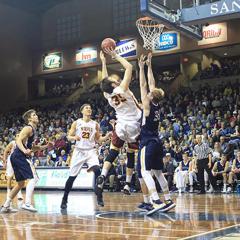