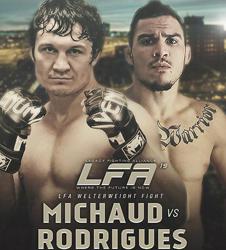 SIOUX FALLS, S.D. – MMA makes its second appearance in 2017 at the Sanford Pentagon on Aug. 18 at 6 p.m. with a card from Legacy Fighting Alliance featuring South Dakota native and UFC veteran David Michaud.

LFA 19 – Michaud vs. Rodrigues features a lineup of 12 fights including nine professional matches and three amateur matches. The entire main card of LFA 19 will be televised live and nationwide on AXS TV at 8 p.m.

"LFA 19 will add to an exciting MMA history in South Dakota that began three summers ago with the RFA," said Ed Soares, CEO of Legacy Fighting Alliance. "We brought the first sanctioned MMA event to the state at RFA 17, we hosted the first MMA world title fight in the state and ten of the fighters that competed for us in South Dakota have gone on to fight in the UFC."

Resurrection Fighting Alliance merged with Legacy FC in January 2017 to form LFA. RFA visited South Dakota four times including RFA 17, which was the first sanctioned MMA event to take place in the state. Ten fighters from the four RFA cards went on to compete for the UFC, and five more would go on to fight for Bellator.

Tickets for LFA 19 - Michaud vs. Rodrigues are available for purchase now at Ticketmaster.com and CombatTickets.com.