SDSU, Missouri State to face off at Pentagon 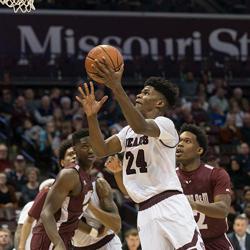 South Dakota State has a 2-3 record at the Pentagon. This will be Missouri State’s first trip to the venue. Since opening in 2013, the Pentagon has hosted 15 NCAA Division I men’s college basketball games.

“We’re pleased to welcome South Dakota State back to Heritage Court, and we’re excited for Missouri State’s players and fans to experience the atmosphere at the Pentagon for the first time,” said Jesse Smith, executive director of the Sanford Pentagon. “It’s going to be a great game with two of the premier players in their respective conferences.”

The Jackrabbits won the 2017 Summit League Tournament, advancing to the NCAA tournament before falling to No. 1 seed Gonzaga. SDSU returns Summit League Player of the Year Mike Daum who broke the school’s single-season scoring record in 2016-17.

“We’re excited to be playing at the Sanford Pentagon again next season. After coaching at the Pentagon with the Jackrabbits last year, and Iowa State in 2015-16, I have always been impressed with the experience provided for student-athletes who have the honor to play on Heritage Court,” said South Dakota State head coach TJ Otzelberger. “The facility is first-class, the hospitality is top-notch and the fans bring energy and enthusiasm every night.”

“We look forward to our game against South Dakota State. They have one of the best players in the country in Mike Daum, and they are coming off an NCAA Tournament appearance,” said Missouri State head coach Paul Lusk. “It will be a great challenge for us.”

South Dakota State leads the all-time series 3-2. The two teams faced each other five times during the 1960s and 70s when the Bears were Southwest Missouri State.