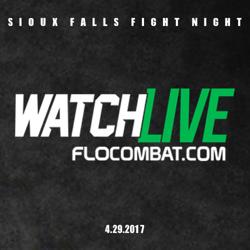 SIOUX FALLS, S.D. – MMA makes its return to Sioux Falls on April 29 at 6 p.m. with a card featuring veterans of the UFC and several fighters with South Dakota connections.

“Fans in Sioux Falls are going to be in for an outstanding show,” said Dave Martin, president of Martin Advisory Group. “We have assembled an exciting card from start to finish, and we are thrilled to be bringing MMA back to the Sanford Pentagon.”

Tickets are now on sale on Ticketmaster.com. Prices range from $25-50. Join the conversation using the hashtag #SiouxFallsFightNight.