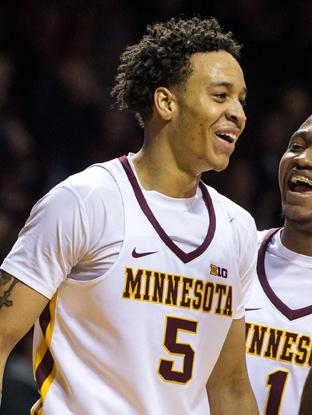 SIOUX FALLS, S.D. – The Minnesota men’s basketball program returns to the Sanford Pentagon for the second-straight year Saturday to face Vanderbilt in a regular-season game at 7 p.m.

Seventh time around
Saturday’s contest is the seventh NCAA Division I men’s basketball game at the Pentagon this season and 15th since the facility opened in 2013 (a complete list of games is at the bottom of the page). Last weekend, South Dakota State, East Tennessee State, Milwaukee and UC Irvine played six games in the inaugural Sanford Pentagon Showcase. East Tennessee State left Sioux Falls with three wins.

About Minnesota
The Big Ten’s Minnesota is off to a 6-1 start this season and only recently suffered its first loss of the year Monday against Florida State. The Gophers logged early season wins against St. John’s and Arkansas and are playing their first and only neutral site game--not including possible postseason games--of 2016-17 on Saturday. Amir Coffey leads an ensemble of four players averaging in double figures. His team-best 14.6 points per game is complimented by Nate Mason (12.7), Dupree McBrayer (11.4) and Jordan Murphy (10.1). Head coach Richard Pitino is in his fourth season and has a 57-52 record with the Gophers.

About Vanderbilt
Vanderbilt is 4-3 and under the direction of first year head coach Bryce Drew, who joined the Commodores in the offseason after six seasons as the boss at Valparaiso.  Members of the Southeastern Conference, Vanderbilt on Tuesday won its second straight game by defeating Tennessee State at home. Matthew Fisher-Davis and Luke Kornet are averaging 15.3 and 14 points per game, respectively, to pace the Commodores. Vanderbilt has played three neutral site games this season, winning one of them against Santa Clara.

Conference diversity
Schools from more than a dozen different NCAA Division I men’s basketball conference have visited the Pentagon in its four-year history. The Big Ten, Big East, Big 12 and Pac 12 have all sent teams to Sioux Falls. Saturday’s stop by Vanderbilt, however, is the first time the Southeastern Conference will have a presence at the Pentagon.

TV coverage
Saturday’s game will be carried live by ESPN3.

Statistically speaking
You can follow live stats for each game at sidearmstats.com/pentagon/bball.

Parking and accommodations
Parking at the Sanford Pentagon is available on the east, west and north side of the facility. Need to eat? The Pentagon includes full-service concession stands, and Beef O’Brady’s is a short walk across the street. Want to stay close to the arena? The Fairfield Inn & Suites is also across the street. The venue also has an official team store and several ATM stations.