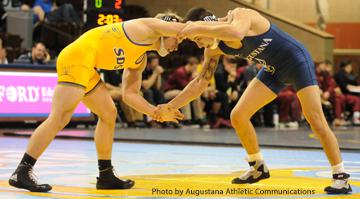 SIOUX FALLS, S.D. – The four college wrestling programs in the Mount Rushmore state will return to the Sanford Pentagon on Dec. 4 for the second annual South Dakota Showcase.

Tickets are available at the door and are $15 for adults and $7 for students and children.

South Dakota State, a member of the Big 12 Conference in wrestling, is 1-1 this season after defeating Iowa State 27-9 to open the season and narrowly falling to Minnesota 18-17. The Jackrabbits went 14-6 last season and qualified a school-record five wrestlers for the NCAA Championships. They also finished fourth at the Big 12 Championship.

Augustana opens its dual season at the South Dakota Showcase.  The Vikings posted an 18-6 mark last season and finished fourth in the Northern Sun Intercollegiate Conference. Augustana return its NCAA Division II National Championships qualifier from a year ago in 184-pounder Aero Amo.

Also a member of the NSIC and using the South Dakota Showcase to ring in the dual season, Northern State finished 7-14 last season. The Wolves’ national qualifier from a year ago, 197-pounder Joe Gomez, is back for his senior campaign.

The Great Plains Athletic Conference’s Dakota Wesleyan will also open its dual season on Dec. 4. The Tigers went 1-16 in 2015-16, defeating St. Olaf in February before sending two wrestlers to the NAIA National Championships in March.