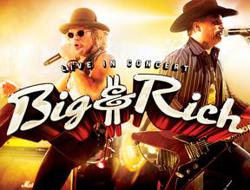 SIOUX FALLS, S.D. – Big & Rich, the country music duo known for hits like “Save a Horse (Ride a Cowboy)” and “Lost in This Moment,” will play the Sanford Pentagon on Oct. 6 at 8 p.m. The pair will be joined by Cowboy Troy and DJ Sinister.

Tickets go on sale Friday at 9 a.m. at Ticketmaster.com. All tickets are $30.

John Rich and Big Kenny Alphin released their first studio album, “Horse of a Different Color,” in 2004. Since then, Big & Rich has produced four more albums, including 2014’s Gravity, which was released under the tandem’s own label, Big & Rich Records. Often called “America’s Technicolor cowboys,” they are known for their unique vocal blend and creative live performances.

A frequent collaborator with Big & Rich, Cowboy Troy is a country rapper who has appeared on the duo’s albums and co-hosted the fifth season of “Nashville Star.” DJ Sinister is the creator of “Country Fried Mix,” a nationally syndicated radio program that features remixed country hits.