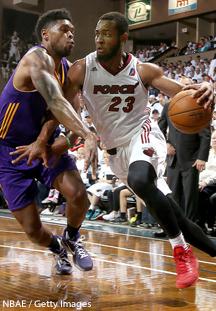 The Skyforce tip off their 28th season Nov. 12 at 7 p.m. at home against the Salt Lake City Stars, a game in which members from the 2016 NBA D-League Championship team will be recognized and celebrated.

Sioux Falls fans will have the opportunity to see 15 different visiting teams play on Heritage Court, including the Greensboro Swarm (Charlotte Hornets affiliate), one of the league's newest expansion teams, on Nov. 29.

The Skyforce will host the Northern Arizona Suns in the annual Christmas Night game, and there will be a rematch of the 2016 NBA Development League Finals when the Los Angeles D-Fenders return to the Pentagon on March 18.

Along with the Swarm, the Long Island Nets (Brooklyn Nets affiliate) and the Windy City Bulls (Chicago Bulls affiliate) have both entered the league as expansion teams, while Northern Arizona and the Salt Lake City Stars (Utah Jazz affiliate) have relocated. The 2016-17 season features four, restructured divisions: