The three-day event uses a round-robin format with two games each day.

“The Pentagon Showcase provides a chance for quality mid-major teams to play each other in an exceptional facility with great fans,” said Eric Larsen, general manager of the Sanford Sports Complex. “There was a need in Division I men’s basketball to bring these types of teams together, and Sioux Falls and the Pentagon are the right combination for a positive fan and student-athlete experience.”

The Pentagon has hosted eight Division I men’s basketball games since opening in 2013. Programs like Wisconsin, St. John’s, UNLV, Iowa State and Minnesota have played in the venue in front of national TV audiences on ESPN and the Big Ten Network.

Big West Conference member UC Irvine (28-10 in 2015-16) was the CollegeInsider.com Tournament (CIT) runner-up last season. Head coach Russell Turner and the Anteaters won a school-record 28 games en route to a share of the Big West Conference title. UC Irvine has been to the postseason each of the last four seasons (2013 CIT, 2014 NIT, 2015 NCAA and 2016 CIT), winning a total of 93 games in that span.

East Tennessee State (24-12 in 2015-16) made it to the Southern Conference Tournament title game a year ago before receiving a berth to the Vegas 16 postseason tournament. Head coach Steve Forbes also coached in the Pentagon as an assistant with Wichita State in 2014.

A member of the Horizon League, Milwaukee (20-13 in 2015-16) finished fifth in the conference regular-season standings. The Panthers logged wins at Wisconsin and Minnesota in December. Milwaukee’s new head coach for 2016-17 is LaVall Jordan.

Ticket information will be announced at a later date.

SDSU and UC Irvine also are scheduled to play an opening round game of the Sanford Pentagon Showcase on Nov. 14 in Irvine, California. NCAA rules allow programs to count multi-team events as only two games toward their regular season total of 29, even if MTEs include as many as four games and all games are played within a 14-day window. The remaining schools also have the option of adding a fourth game.

What the head coaches are saying about the Sanford Pentagon…

TJ Otzelberger, South Dakota State:  “The Pentagon and staff provided an unparalleled experience for Iowa State last season in our game against the University of Colorado.  The Pentagon provided a first-class experience from the locker room, team gear and Pentagon staff hospitality. I’m excited to bring the Jackrabbits to the Pentagon as a head coach and have our athletes experience all the Pentagon has to offer.”

Russell Turner, UC Irvine:  “My team and I are excited about coming to Sioux Falls and competing in the Sanford Pentagon.  For many of us, it will be our first trip to South Dakota, and we appreciate the Jackrabbits’ invitation.  We look forward to interacting with the friendly folks in the Rushmore state.”

Steve Forbes, East Tennessee State:  “We are excited to be competing in the Sanford Pentagon Showcase in Sioux Falls, South Dakota, this November. We are looking forward to playing a very challenging field in a great venue. This will be a good early season test for our team."

LaVall Jordan, Milwaukee:  “We’re excited to play at the Sanford Pentagon.  We’ve heard great things about the arena and are impressed with what the Sanford Pentagon has done for college basketball.  It will be a competitive event for our program and we look forward to playing there this season.” 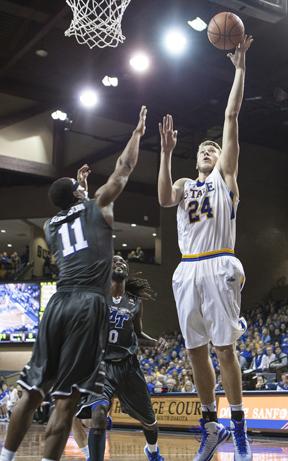 Division I Men’s Basketball Games at the Sanford Pentagon