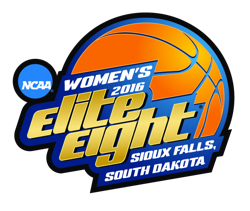 SIOUX FALLS, S.D. - The field is set and tickets are on sale for the 2016 NCAA Division II Women’s Basketball Elite Eight hosted by the Sioux Falls Sports Authority and Northern Sun Intercollegiate Conference at the Sanford Pentagon on March 22 and 23.

The Elite Eight is a two-session tournament with the quarterfinals on March 22 and the semifinals on March 23. The national championship game is in Indianapolis on April 4 in conjunction with the Division I Women’s Final Four.

In addition to the Elite Eight, Sioux Falls will also play host to one of four D-I Women’s Basketball Regionals on March 25 and 27 at the Denny Sanford PREMIER Center. A combined all-session pass for the DII Elite Eight and DI Women’s Regional is available and ranges $55 - $95. Combined all-session passes can be purchased at the KELOLAND Box Office in the PREMIER Center, at ticketmaster.com or by calling 800-745-3000.