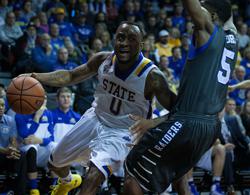 SIOUX FALLS, S.D. - South Dakota State trailed at the half for the just the second time this season, but unlike the first time the Jackrabbits battle back to win on Sunday against Middle Tennessee at the Sanford Pentagon by the score of 65-61.

The Jackrabbits end the non-league portion of their schedule with an 11-3 record, while the Blue Raiders head home with a 7-3 mark.

“Our guys were a little unsure how to act after the game because I think they probably thought I was upset with them, but I just told them that we beat a good basketball team,” SDSU coach Scott Nagy said. “We didn’t play great, our guys know they didn’t play great, and obviously free throws were a frustration for our basketball team, but we still figured out a way to win the game.”

SDSU did struggle from the foul line, finishing a season-low 45.5 percent, 15 of 33, but won the rebounding battle 49-32, which not only represents the team’s highest rebound total of the season, but also its highest rebound margin.

The Jackrabbits scored the first five points of the game on an Ian Theisen jumper and a Deondre Parks 3-pointer, the latter of which drew a timeout from the Blue Raider bench. SDSU then got a layup and-1 from Theisen, followed by a layup from Parks to take a 10-0 lead, and draw another timeout from the MT bench less than two minutes into the game.

The SDSU lead would reach as many as 11 points at 14-3 less than eight minutes into the game, but the Blue Raiders came back strong, using a 13-1 run, part of a 20-4 run, to erase the Jackrabbits lead and take a 20-19 lead with just under six minutes left in the first half.

Mike Daum briefly put the Jacks back in front 22-20 with a 3-pointer, but the Blue Raiders answered with a three of their own to retake the lead at 23-22 and which stretched to 27-22 before the MT took a 31-27 lead into halftime.

Down 37-34 less than four minutes into the second half, Reed Tellinghuisen tied the game with a 3-pointer from the left wing, his first points of the game. The Jacks then took 39-37 lead on a Keaton Moffitt drive with 15:17 left. Part of a 9-0 run that ended with the Jacks leading 43-37 with 13:22 left.

That lead would grow to as many as five points after a Parks triple, and although Middle Tennessee would never regain the lead, it did tie the game at 51 with just over seven minutes left, but the Jacks scored the next five points and led by as many as eight down the stretch.

Some missed free throws gave the Blue Raiders a chance, as they cut it to 64-61 with 17 seconds left, but Tevin King made 1 of 2 from the charity stripe with 10 seconds left to seal the win.

Parks led all players in the game with 16 points, and tied for game-high honors with eight rebounds. Theisen finished with a career-high 13 points, while Daum added 10 points, all in the first half. King, Moffitt, Tellinghuisen and Lane Severyn combined to score 25 points for the Jacks, all in the second half.

NOTES: Middle Tennessee leads the all-time series 2-1 … SDSU is 1-1 all-time in games played at the Sanford Pentagon … SDSU led at the half in its first 12 games of the season, but trailed in its last two … the win marked the 395th career win for Nagy … SDSU last shot less than 50 percent from the free throw line on Nov. 14, 2014, in a 14 for 29 performance at Buffalo (48 percent) … SDSU shot below 40 percent for the game for the fourth time this season, but won for the second time … the 11 non-conference wins marks the most for SDSU in the Division I era, topping the nine wins from the 2011-12 season.