NCAA championship to be decided on Heritage Court 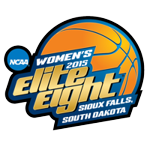 Semifinals start at 6 p.m. on Wednesday, and Friday’s title game tips at 7 p.m.

This event is among eight Division II national championships awarded to Sioux Falls by the NCAA in December 2013.

Fan information
Parking: Fans are welcome to park for free in lots located on the northwest and east sides of the Sanford Pentagon plus the east side of the Sanford Fieldhouse.