This year’s field includes South Dakota State University, the University of Washington, the University of Nevada and George Mason University. The four teams have a combined 37 NCAA Tournament appearances and 10 trips to the Sweet 16. All four programs finished in the Top 150 in KenPom rankings last year, a statistical category based off the differential between a team's offensive and defensive ratings.

Tickets are on sale now. Please contact Troy Giegling at 605-312-7902 or troy.giegling@sanfordhealth.org regarding sponsorships of the event.

“All four of the teams in this field have competed on the NCAA’s biggest stage, and we look forward to having them begin their seasons on Heritage Court,” said Jesse Smith, vice president of operations for the Sanford Sports Complex. “With the addition of fans to this year’s event, the Crossover Classic will reach a new level of excitement and an even better atmosphere for the teams.”

“The Sanford Pentagon is a first-class facility, and we are thrilled to bring elite college basketball back to Sioux Falls,” said Lea Miller-Tooley, tournament director. “The Crossover Classic will be a tremendous opportunity for the student-athletes to showcase their talents on the court while experiencing incredible hospitality from the staff at Sanford Health."

“We’re very excited to be a part of the Crossover Classic at the Sanford Pentagon in South Dakota,” said Hopkins. “As a program, we have prided ourselves in building a strong non-conference schedule, and this event is exactly on par with that mindset. It will be a great early season test for us in a unique venue. South Dakota has amazing basketball fans and we’re looking forward to being a part of this event.”

George Mason made a memorable run to the NCAA Final Four in 2006, knocking off perennial powerhouse programs Michigan State, North Carolina and Connecticut. First-year head coach Kim English recently served as an assistant coach at the University of Tennessee. The former NBA draft pick inherits a Patriots team that returns seven letter-winners and finished last season at 13-9 and sixth in the Atlantic 10 Conference.

“Our guys are looking forward to playing at the Sanford Pentagon, one of the country’s best and most unique basketball venues,” English said. “I have always admired the work of Complete Sports Management. They annually run some of the best and most well-respected events in the nation. This tournament presents an exciting challenge to compete against three outstanding programs and will be a formidable early season test for our team.”

“We are pleased to partner with Complete Sports Management and Sanford Health in what will be another fabulous event. To compete against three quality teams with outstanding traditions is a great opportunity,” said Henderson. “The Sanford Pentagon is one of the most prestigious venues in the country. To play three games in Sioux Falls with our fans going crazy will be an incredible experience.”

Nevada is coming off a 16-10 season, the second year under head coach Steve Alford. The former NCAA All-American led Indiana to the NCAA National Championship as a player in 1987. Alford also helped the United States win the gold medal in the 1984 Olympics. On January 25, 2020, he won his 600th game as a head coach.

"We are very excited to be part of this outstanding field of teams in the 2021 Crossover Classic,” said Alford. “This event is one of the most competitive of the preseason and is well-supported by the local community. Our team looks forward to getting in front of fans again, as well as preparing ourselves for Mountain West play."

Three of the eight participants in last year’s Crossover Classic qualified for the NCAA Tournament, including the inaugural champion, West Virginia. The four-day event, held November 25-27, was televised live on the ESPN family of networks and viewed by more than 2.8 million people. 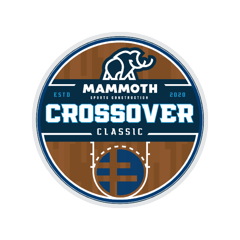