MMA returns to Sanford Pentagon for two events in May 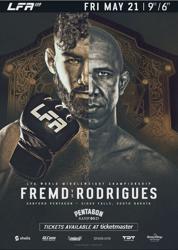 SIOUX FALLS, S.D. – MMA makes its return to Sioux Falls with two events in May at the Sanford Pentagon with cards from Legacy Fighting Alliance featuring many fighters with ties to South Dakota and the Midwest.

LFA 107, which takes place on May 14, will be closed to the general public. The main card will air on UFC Fight Pass.

LFA 108, which takes place on May 21, will be held with limited capacity. Tickets for LFA 108 are available for purchase at Ticketmaster.com. Contact Derek Sparks at 605-312-7917 for ringside tables, suites and 4-pack tickets with food vouchers to Blue Rock Bar and Grill.

Greenway and MMA stars Ryan Bader, Robbie Lawler and Logan Storley are scheduled to be in attendance at LFA 108. Lawler and Storley compete for Sanford MMA, a team of nearly 40 elite fighters that train in a state-of-the-art facility in Deerfield Beach, Florida.

The Sanford Pentagon has hosted various mixed martial arts events since 2014, including Bellator 204 in August 2018 and multiple RFA/LFA cards. More than a dozen fighters who have competed at the Pentagon have gone on to fight for Bellator or UFC.