Division I Dakota men’s teams to meet at Sanford Pentagon

SIOUX FALLS, S.D. – All four Division I men’s basketball programs from the Dakotas will face off against each during a three-day round-robin event at the Sanford Pentagon Dec. 10-12. The CU Mortgage Direct Dakota Showcase features South Dakota State, South Dakota, North Dakota State and North Dakota in a non-conference event.

Midco Sports Network will broadcast and stream all games.

The Sanford Pentagon will work closely with the schools and individual states and be ready to adjust based on guidelines and safety measures for all involved.

“These four coaches came to us with an idea to help them find meaningful games. In a unique year of scheduling for all college basketball teams, we were eager to work with them to create a very unique, one-time event, that evokes memories of past NCC Holiday Tournaments,” said Jesse Smith, vice president of operations at the Sanford Sports Complex.” We are grateful to work with awesome university partners to give their athletes an opportunity to play close to home against their rivals on a neutral floor.”

South Dakota State is coming off a 22-10 season with a 13-3 record in conference and a share of the regular season title. The Jackrabbits were perfect at Frost Arena, posting a 16-0 home record. SDSU returns almost 90-percent of its scoring from last season, including 2019-20 Summit League Player of the Year, Douglas Wilson (18.6 ppg), Summit League Freshman of the Year, Noah Friedel, and All-Summit League Second Team selection, Matt Dentlinger.

“Being back at the Sanford Pentagon, one of the premier off-campus venues in college basketball, is exciting,” said South Dakota State head coach Eric Henderson. “This is yet another example of how great our partnership is with Sanford Health. During these unique times, creativity in scheduling is needed. We appreciate the collaboration of our fellow Dakota schools and the folks from the Pentagon to make this event a reality.”

South Dakota welcomes in eight brand new players this season along with A.J. Plitzuweit, Kanon Koster and Brady Heiman who sat out last season due to transfer rules. In addition to preseason first team all-Summit selection Stanley Umude, the Coyotes return four this season. Last season, Umude averaged 16.7 points, 6.3 rebounds and 1.4 blocks per game. USD also reached 20 wins in a season for the third time in the past four years this past season.

“This is unusual times with COVID to play non-league games against league opponents, but our goal is to get as many games in as possible as is the rest of the league,” said South Dakota head coach Todd Lee. “It is obviously going to be great competition at a great facility in the Pentagon. These three teams are really good and we could possibly play them four times during the year with the conference tournament at the end of the season. It’s also an opportunity to play three games in three days, which is similar to the conference tournament at the end of the season so that will also help us prepare.”

The Bison are picked to finish third in The Summit League this season, coming off a 25-8 record and a sweep of the league’s regular season and tournament championships a year ago. NDSU returns three starters in senior Rocky Kreuser and juniors Tyree Eady and Sam Griesel. Kreuser is NDSU's top returning scorer, averaging 10 points and 6 rebounds per game last year. The Bison also look to introduce an influx of local talent, including sophomore Maleeck Harden-Hayes (Moorhead, MN), freshman Boden Skunberg (Jamestown, ND), and freshman Grant Nelson (Devils Lake, ND).

“First and foremost, we want to thank the Pentagon staff and our wonderful partners, Sanford Health, for their hard work in making this event happen,” said North Dakota State head coach David Richman. “We’re thrilled to be partnering with three other great programs for an event that will be great for our teams, as well as all of our great fans within the region. We appreciate the other three coaches’ and programs’ willingness to make this happen. These are crazy times, and creative and open thought helped to pull this off. I know our team and staff will be looking forward to the opportunity to get on the floor, grow, and compete.”

North Dakota is coming off a run to the championship game of the Summit League Tournament in 2020. The Hawks also had a memorable 75-74 win at Nebraska last season. UND returns Filip Rebraca, a pre-season first-team All-Summit League selection as well as its top returning scorer (14.3 ppg) and rebounder (8.9 rpg). Head coach Paul Sather returns to the Sanford Pentagon where he lead Northern State to the NCAA DII title game in 2018.

“The challenges we face scheduling non-conference games this year has opened up an opportunity to play some familiar conference rivals in an awesome venue at the Sanford Pentagon in Sioux Falls,” said North Dakota head coach Paul Sather. “There’s a rich history of matchups like these that have taken place going way back in the NCC years. It should be an incredible three days!” 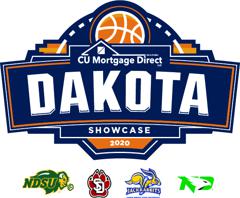