The Aggies will play three games in the event, beginning with a first round matchup against Wichita State, Wednesday, Nov. 25 at 8:30 p.m. on ESPN2.

A limited number of tickets are available to the general public. Fans can purchase tickets at ticketmaster.com. For information on purchasing suites, contact Mallory Shurtz at mallory.shurtz@cs-mgmt.com. Masks are required for all spectators and will be available for free at the door.

USU returns seven letterwinners from a season ago, including three starters in junior center Neemias Queta, junior forward Justin Bean and junior wing Brock Miller. Both Queta and Bean were named to the MW All-Defensive Team during the 2019-20 campaign and will combine to form one of the most formidable front courts in the Mountain West. Bean, a third-team all-MW selection last season, is the only player in the MW that is returning that averaged a double-double last year, turning in 11.9 points and 10.5 rebounds per game. Queta, the 2019 MW Freshman and Defensive Player of the Year, returns completely healthy after an injury slowed his 2019-20 campaign.

This will be Utah State’s first trip to the Sanford Pentagon. Head coach Craig Smith returns to South Dakota after serving as the head coach of the University of South Dakota from 2014-2018.

"We are thrilled to be participating in the Bad Boy Mowers Crossover event," Smith said. "This event will have an NCAA Tournament vibe and will be first class in every aspect. The Sanford Pentagon is a unique, state-of-the-art arena that oozes with nostalgia and honors the history of the great game of basketball.

"Complete Sports Management, led by Lea Miller, is held in the highest regard in the basketball world for hosting amazing tournaments," he continued. "With Sanford Health, a pioneer in the health and medical field, I can speak with first-hand knowledge that our team, and every team participating, will have a tremendous experience and are in great hands with safety and health as the highest priority. We are looking forward to a fantastic experience."

All-time against the field, USU is 2-2 against Creighton, 4-1 against South Dakota State, 1-2 against Texas A&M and 6-5 against St. Mary’s. West Virginia and Memphis would be first-time opponents for the Aggies. 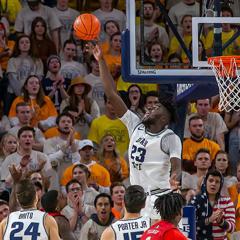