Preseason top-five teams Gonzaga, Iowa to square off at Pentagon

SIOUX FALLS, S.D. – The unofficial preseason No. 1 and No. 5 teams in the country will face off at the Sanford Pentagon in a regular-season men’s college basketball game on Dec. 19.

CBS Sports will produce and broadcast the game on CBS Television Network at 11 a.m. CT.

A limited number of tickets will go on sale at 10 a.m. on Nov. 17 at ticketmaster.com. Masks are required for all spectators and will be available for free at the door. The Sanford Pentagon will work closely with the schools and individual states and be ready to adjust based on guidelines and safety measures for all involved.

“Two of the best men’s college basketball teams in the country are going to be playing on Heritage Court and televised nationally on CBS – what more could you ask for?” said Steve Young, president of Sanford Sports. “Gonzaga has always been a team at the top of our wish list to play at the Pentagon, and Iowa is loaded with talent. I can’t say enough about these two programs and our staff for working together to make this incredible matchup happen.”

The contest will be Iowa’s second trip to the Pentagon, which has hosted 28 NCAA Division I men’s college basketball games since opening in 2013. The Hawkeyes defeated Colorado, 80-73, on Dec. 22, 2017. This will be Gonzaga’s first visit to the Pentagon.

A member of the Big Ten Conference, Iowa is coming off a 20-11 season, and a fifth place conference finish with a mark of 11-9. The Hawkeyes were scheduled to play Minnesota in the Big Ten Tournament before the game and tournament were cancelled to due COVID-19 concerns.

Iowa is an unofficial preseason top-five team for the 2020-21 season. All-American center Luka Garza is back for his senior season, and the Hawkeyes have six other players returning with starting experience, including upperclassmen all-conference honorees Jordan Bohannon and Joe Wieskamp, and Connor McCaffery, who led all Division I players in assist-to-turnover ratio a year ago.

“We are excited to return to Sioux Falls and the Sanford Pentagon to compete against a talented Gonzaga team on a national stage,” said Iowa head coach Fran McCaffery. “I have a tremendous amount of respect for Mark Few and what his program has accomplished for quite some time. Adding a game of this magnitude to our schedule will be a good early test for our basketball team and prepare us for league play.”

Gonzaga finished the 2019-20 season ranked second in the country, posting a 31-2 record with wins over Top 25 teams Oregon, Arizona Washington and North Carolina. The Bulldogs defeated Saint Mary’s in the title game of the West Coast Conference Championships and were projected to receive a No. 1 seed in the NCAA Tournament.

Gonzaga is the unofficial No. 1 team in the country entering the season. Trendy preseason All-American pick Corey Kispert returns for his senior season, along with Joel Ayayi, who was named the 2020 West Coast Conference Tournament Most Outstanding Player. The Zags also welcome back talented a front court duo in Drew Timme and Anton Watson, and five-star recruit Jalen Suggs leads the best recruiting class in GU history.

“We are looking forward to playing against an extremely talented Iowa team,” Gonzaga head coach Mark Few said. “We have the utmost respect for Fran McCaffery and his program. We are excited for the opportunity to compete in the Sanford Pentagon in Sioux Falls in a nationally televised game on CBS.”

This will be the fourth meeting between Gonzaga and Iowa. The Hawkeyes won the first two contests in 1984 and 1985, while the Zags won the last meeting in the 2015 NCAA Tournament. 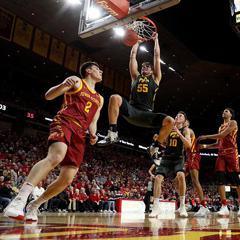