The Vikings take on Wayne State 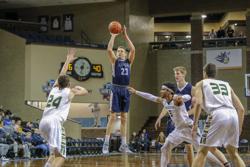 SIOUX FALLS, S.D. – The Augustana women’s and men’s basketball team concludes the 2019 calendar year Saturday with a 3:30 p.m. and 5:30 p.m. contest against Wayne State inside the Sanford Pentagon.

For the women, the Vikings and Wildcats are meeting for the second time this season with the first matchup going to the Wildcats in a tightly contested battle. Augustana leads the all-time series 24-16.

In the men’s game, the contest is the first time the Vikings will have faced an opponent for the second time in the 2019-20 season as Augie topped the Wildcats 75-66 in the NSIC opener on Nov. 30.

Sponsored by Midco, fans will have four chances to win prizes as two 50” Samsung televisions and two pairs of Bose headphones will be given away during the. Santa will also be making a visit to the Sanford Pentagon during the doubleheader.

Wayne State women enter with a 7-3 record and 3-2 record in NSIC action. Recently, the Wildcats split a pair of games to Bemidji State and Minnesota Crookston. Wayne State opened conference play with a win over Augustana and Upper Iowa before losing to Winona State.

The Wildcats are led by Erin Norling who averages 20.4 points per game while three others average double-figure scoring. Kylie Hammer recorded a career-high 21 points against the Vikings the last time the two-faced. The sophomore also finished with eight boards, five assists and three steals. As a team, they shoot 43 percent from the field and 34 percent from deep. The Wildcats average 77.9 points per game while allowing 68.7 points.

Wayne State men enters Saturday’s game with a 5-8 overall record and 2-3 in the NSIC. The Wildcats swept Upper Iowa and Winona State the weekend after the Vikings topped WSC in the NSIC opener. Last weekend, Wayne State dropped both league games to Bemidji State (90-61) and Minnesota Crookston (92-78). Although WSC will not be playing a home game on Saturday, it is worth noting that the Wildcats only home loss this year is to the Vikings.

Jordan Janssen, who ranks second in the nation with eight double-doubles, leads Wayne State with 17.8 points and 10.9 rebounds per game. He is joined in double-digit scoring by Nick Ferrarini (13.8), Al ‘Tavius Jackson (11.5) and Nate Mohr (11.1). Wayne State averages 73.5 points per game while it allows 77.3 points per game.

Augustana, winners of two-straight in the series, leads the overall series at 33-17. The Vikings have split with the Wildcats each of the last two years. Saturday’s game will look to be the first season sweep of Wayne State since the 2016-17 season. The series dates back to 1938 when Augustana claimed a 46-30 win in the inaugural meeting.

Augie women enter the contest with a 6-3 record and a 2-3 record in the NSIC. The Vikings split their last weekend with a win over Minnesota Crookston before losing to Bemidji State 74-57.

As a team, the Vikings average 72.1 points while allowing 61.6 points per game. Augie shoots at a 39 percent clip from the field while hauling in 41.1 rebounds per contest. Augustana ranks second in the NSIC with an 8.22 turnover margin and ranks second with 10.56 steals per game. The Vikings are led by Lauren Sees with 12.7 points a game and Abby Hora 12.2 points per game.

The Augustana men are 9-2 overall and 4-1 in NSIC play. The Vikings had a six-game win streak snapped in a 75-73 loss last Saturday at Bemidji State. The night before, the Vikings ran away from Minnesota Crookston, 101-68.

Who to Watch For

Freshman Lauren Sees shined the last time out for the Vikings as she led all scorers in both contests. The Avon, South Dakota, native recorded 18 points in a win over Minnesota Crookston and poured in a season-high 22 points on 10-of-15 shooting from the field. On the season, Sees averages 12.7 points while shooting a team-high 57 percent from the field.

Todd, hailing from Monticello, Minnesota, averaged 20 points over the two games last weekend. The sophomore has started every game this year and leads the Vikings with 26-made 3-point field goals. In an ironic twist, he hits both his long-range and 2-point attempts at 44 percent with half of his makes coming from deep. He has also tallied 24 assists on the year including a season-high seven at Minnesota Crookston.

The women are leaving a decade that was very kind to them. Augie has recorded a 235-86 record in the last 10 years that also included four trips to the NCAA Tournament and the program's first appearance in the NCAA Division II Final Four in 2013 as well as the NSIC Conference Tournament Championship. The Vikings also returned to the tournament in 2018 after an NSIC regular season and conference tournament title with their season ending in the NCAA Tournament Sweet 16.