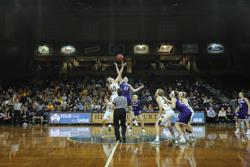 SIOUX FALLS, S.D. – The Augustana men’s and women’s basketball teams makes its NSIC home debut Friday and Saturday inside the Sanford Pentagon. Friday’s contest against Winona State is at 5:30 p.m. for the women, followed at 7:30 p.m. for the men while Saturday’s game against Upper Iowa is at 3:30 p.m. and 5:30 p.m.

The Games
On Friday, fans are encouraged to participate in a White Out by wearing White to the doubleheader. At halftime, Tyler’s Amazing Balancing Act will take to Heritage Court. The Amazing Tyler has been seen on America’s Got Talent and is the No. 1 most booked halftime act in college basketball. Augustana fans are encouraged to gather after Saturday's games at the Blue Rock Bar & Grill across the street from the Sanford Pentagon. Light appetizers will be provided and a cash bar will be available.

The Boss' Pizza & Chicken 3-point promotion is back for 2019-20. When Augustana men's and women's basketball teams combine to make 25 or more 3-point shots in a doubleheader, fans receive a coupon for $5 pizza as they leave the game.

The Augustana women hold a 28-10 record all-time against the Warriors including winning the past three matchups. The Vikings are 16-3 while playing at home against Winona State. Augie leads the all-time series with Upper Iowa winning all 23 matchups between the two schools.

Winona State men enter with a 3-4 overall record and is 0-1 in the NSIC while Upper Iowa is 4-3 and 1-0. The Warriors and Peacocks met this past Saturday with UIU coming away with the victory. Augustana is 6-1 on the season and 1-0 in league play. The six wins under the Vikings’ belts are the most in the NSIC this year.

The Warriors
The Winona State women enter at 5-0 overall and 1-0 in conference action after defeating Upper Iowa in their NSIC opener. WSU beat its first two opponents easily before having back-to-back close games at the Quincy Subway Classic including an overtime win over Quincy. The Warriors are led by Emily Kieck with 12.6 points a contest while five other players also average double-figure scoring. Taylor Hustad has a team-high 7.2 rebounds and averages 11.2 points a game.

As a team, WSU averages 79.2 points per contest while holding its opponents to 63.8 points. The Warriors shoot at a 43-percent clip from the field and 36-percent from deep.

The Winona State men are 3-4 this season and 0-1 in NSIC action after falling at Upper Iowa last Saturday. Prior to that loss, Winona State was riding a three-game win streak with victories over Michigan Tech, Bethany Lutheran and Viterbo. Kevion Taylor and Caleb Wagner lead WSU with 16.9 and 16.3 points per game, respectively. Andrea Lo Biondo grabs a team-best 7.9 rebounds per game.

The series with Winona dates back to 1937 when the Warriors claimed the initial meeting. The two squads then did not meet again until 1997 at the Sioux Falls Thanksgiving Tournament. Augustana leads the series, 17-13.

The Peacocks
The Upper Iowa women are 0-6 on the season and are 0-1 after dropping their conference opener to Winona State. The Peacocks enter the weekend with a -14.3 scoring margin on the young season. UIU dropped both of its games at the Quincy Subway Classic prior to this past weekend to Quincy and Maryville. The Peacocks are led by Jessica Musgrave with 15.8 points per game and 6.5 rebounds per contest.

The Upper Iowa men enter the weekend holding a 4-3 record and topped Winona State 84-79 in its NSIC opener. Prior to coming to Sioux Falls Saturday, the Peacocks play at Wayne State. Jareese Williams leads UIU at 14.9 points and 5.7 rebounds per game. He owns a season-high 24 points in the Peacocks’ 83-70 win over Central Oklahoma. In the NSIC opener, Joe Smoldt tallied 17 points to lead a trio of Peacocks in double-digit scoring.

Augustana and Upper Iowa first met in 1961 and 1962 before discontinuing the series that later resumed in 2005. Augustana won the first even meetings and leads the series at 19-7.

The Vikings Women
Augustana is coming off dropping its first game of the season after an undefeated nonconference schedule. The Vikings fell to Wayne State in their NSIC opener 80-76 in Rice Auditorium.

After a close game that featured a 32-32 halftime score, the Vikings had a chance to tie things up with under a minute to go. Augustana had the ball with 12 seconds left with the score at 76-74. Vishe' Rabb took a drive on the left side but was called for an offensive foul giving the ball back to the Wildcats. After the Wildcats made a pair from the charity strip, Hana Metoxen was fouled after making a layup to give the Vikings a chance to make it 78-77 but Metoxen would miss the free throw. The Wildcats hit two free throws from the line to close the game out.

Augustana was led by Rabb with 17 while Abby Hora and Lauren Sees finished 12 and 10, respectively, Metoxen finished with six boards, three assists and four steal against the Wildcats.

On the season, the Vikings are led by Hora with 15 points per contest n 43 percent shooting from the field. The senior has also pulled down 4.2 rebounds and ranks second in the NSIC with 2.6 steals per contest. Rabb averages 12.8 while Sees has recorded 13 points per contest.

As a team, the Vikings average 78.2 points while giving up 61.2 points a game. Augustana holds a 9.8 turnover margin that ranks second in the conference and 10th nationally. Augie also ranks second in the NSIC in steal per game with 11.20 while ranking first with 4.8 blocked shots per game.

Senior Abby Hora has had a great start to her final year in the navy and gold. Hora has averaged 15.0 points, 4.2 rebounds and 1.8 assists on the season. The senior also ranks second in the NSIC with 13 steals on the season.

The Vikings Men
Augustana is 6-1 overall and 1-0 in the NSIC after a conference-opening win at Wayne State this past Saturday. Two Vikings tallied a double-double in the win while a third was a rebound shy. Tyler Riemersma (20 points and 16 rebounds) and Michael Schaefer (17 points and 11 rebounds) each recorded a double-double while Adam Dykman finished with 15 points and nine rebounds. The trio led the Vikings to a 75-66 win over Wayne State.

Riemersma, along with his strong game against Nebraska Christian earlier last week, was named the NSIC South Division Player of the Week for the second time in his career.

For the season, Matt Cartwright leads Augustana with 19.6 points per game. He is followed in the scoring column by Schaefer at 12.4 and Matt Todd at 12.3 points per game. Riemersma nearly averages a double-double with 10.7 points and 9.4 rebounds per contest.

The Vikings rank 14th in the nation with a +10.1 rebound margin while ranking fifth in the country with 15.7 offensive rebounds per game.