SIOUX FALLS, S.D. – The Sanford Pentagon will host Minnesota and Oklahoma in a regular-season men’s college basketball game on at 7 p.m. on Nov. 9.

Tickets are now on sale at this link.

The contest will be Minnesota’s third trip to the Pentagon, which has hosted 25 NCAA Division I men’s college basketball games since opening in 2013. The Gophers lost to Oklahoma State 62-60 on Dec. 12, 2015, and defeated Vanderbilt 56-52 on Dec. 3, 2016. This will be Oklahoma’s first visit to the Pentagon.

“We are thrilled to have two NCAA Tournament teams in Minnesota and Oklahoma face each other on Heritage Court,” said Kevin Lampe, president of Sanford Sports. “It’s exciting to welcome back the Gophers to the Pentagon, and we’re looking forward to introducing the Sooners to the atmosphere on Heritage Court. We have no doubt this will be a great matchup and a memorable experience for the players and fans.”

A member of the Big Ten, Minnesota is coming off a 22-14 season, finishing seventh in the conference. The Gophers advanced to the second round of the NCAA Tournament last season before falling to eventual Final Four participant Michigan State.

“I could not be more excited about bringing our team back to the Sanford Pentagon next season,” said Minnesota head coach Richard Pitino. “We will have a chance to compete against a perennial power in Oklahoma very early in the season, in one of the best neutral-site environments in the country. I have the utmost respect for Coach Kruger and the program he has built at OU. The game will provide a tremendous experience for our team and our fans.”

Oklahoma, a Big 12 program, finished the 2018-19 season with a 20-14 record. The Sooners advanced to the second round of the NCAA Tournament last season, before falling to eventual national champion Virginia.

“We're excited to add another challenging neutral site game for next season by facing a talented Minnesota team at the Sanford Pentagon,” said Oklahoma head coach Lon Kruger. “Sanford Health is a huge proponent of college basketball and a crucial ally in the fight against cancer through its support of the Coaches vs. Cancer organization.”

This will be the ninth meeting between Minnesota and Oklahoma, with the series tied at 4-4. The last time the teams met was in 2004 at the Great Alaskan Shootout where the Sooners won 67-54. 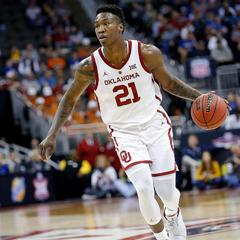